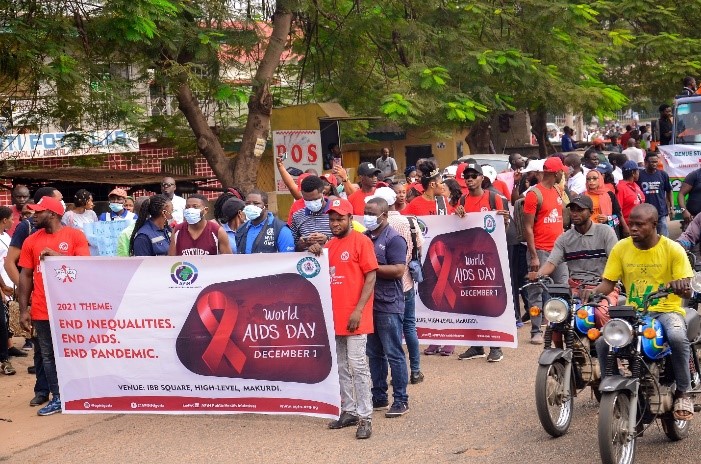 APIN Benue State joined stakeholders from government agencies, NGOs, and relevant networks & associations to commemorate World AIDS Day through a series of events. Before the actual World AIDS Day, APIN, the National Youth Network on HIV/AIDS (NYNETHA) and the Benue State Agency for the Control of AIDS (BENSACA) held in a candlelight procession to honour those who had passed away as a result of AIDS and to demonstrate a shared commitment to end HIV/AIDS in the state. In addition, An interdenominational Christian service at Dunamis International Gospel Centre, Makurdi, and a Muslim Juma’at prayer at the Makurdi Central Mosque were held to kick off the WAD activities and sensitize the religious community in the state. APIN Benue State joined other stakeholders in a walk/rally from Tito Gate (Low Level, Makurdi) to Ibrahim Babangida Square (High Level, Makurdi). During the rally, the procession made stops at strategic points to sensitize the general public on the 2021 WAD theme and to encourage uptake of HIV testing services. The event culminated in a grand finale at Ibrahim Babangida Square, Makurdi, where representatives of various government agencies, partner organizations, and the First Lady of Benue State commended the efforts of partners to achieve epidemic control of HIV in the State. HIV testing services were provided to all consenting members of the public at the venue of the event.